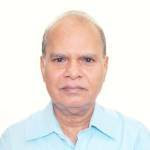 Born on 1st April 1943 Dr Dwijesh Kumar Panda did his M.B.B.S from V.S.S Medical College, Burla in 1967. In 1978 Dr. Panda completed his M.D in Pathology and Microbiology from S.C.B Medical college Cuttack. He was awarded Ph. D in medicine on the subject "Immunology in Lymphatic Filariasis" in 1992.

Dr Panda has worked in various capacities in rural and tribal areas in the state of Orissa since 1968 on health services and Health delivery system.

At present Dr Panda is engaged in the research of Filariasis to find out the efficacy of the herbal drug "Typhonium trilobatum" for treatment of Filaria patients. The research is a joint venture of Director Life Sciences, Orissa and Director, Regional Plant Research Centre, Bhubaneswar, Orissa. The ethical committee met on 30th Dec, 1998 under the chairmanship of Padmashree Dr V.P Sharma Emeritus scientist I.C.M.R requested Dr D. K. Panda to undertake the clinical trial on Filaria patients to determine the efficacy of the herbal drug which is available locally.


He has been a member of the International Jury for UNESCO Kalinga Prize, national jury for Bhatnagar prize, Chairman of review committee for many national research institute and Task force for Higher Education including Medical Education for Odisha.
Email ThisBlogThis!Share to TwitterShare to FacebookShare to Pinterest
Home
Subscribe to: Posts (Atom)