Organ transplantation
Dr. Dwijesh Kumar Panda
Every brain-dead person is a potential organ donor.  It becomes possible after the family has consented for retrieval of organs. Despite growing awareness, the recognition of brain death to organ donation is unexpectedly low in India. Public hospitals are not taking interest in identifying and declaring brain deaths. The conversion rates is less than their private counterparts even with successful programs. Refusal from the family is often cited as the key reason. Certainly it is not the sole cause. Hesitancy of the doctors in declaring brain death, police nods and postmortem will help the count. Accidents, falls, and other incidents where head injury is common, often leave patients brain dead. Lack of knowledge about the procedure and absence of counsellors at hospitals hurting the conversion rates. Over 90% of brain deaths occur in public hospitals. Most accident patients are rushed there. They don’t run transplant programmes. Public hospitals participation can double the donor pool.
Organ transplantation is a medical procedure in which an organ is removed from one body and placed in the body of a recipient. It replaces a damaged or missing organ.  Organs and/or tissues that are transplanted within the same person's body are called autografts. Transplants that are recently performed between two subjects of the same species are called allografts. Allografts can either be from a living or cadaveric source. Organs that have been successfully transplanted include the heart, kidneys, liver, lungs, pancreas, intestine, and thymus. Some organs, like the brain, cannot be transplanted. Organ donors may be living or brain dead. Organs that can be retrieved from a brain dead person are of two types. Solid organs are kidneys, liver, lungs, heart, intestine and pancreas. Tissues are corneas, skin, heart valves, cartilage, bones, vessels.

How is brain stem death declared?
Every hospital has a brain death committee, involving team of four doctors to declare a person brain-dead. The team has to perform apnea tests to check if the patient can breathe without aid, has any pupil response to light and responds to pain. Tests are repeated twice in six hours. Brain death can happen only in Intensive Care Units. The brain-stem is situated in the lower part of the brain. It is connected to the spinal cord and is responsible for breathing, blood pressure and heart beat. The irreparably damage of brain-stem is declared brain dead. Brain death results from a severe brain injury. It may be due to road accident or bleeding in the brain (stroke).
The brain swells up after an injury. It cannot expand much as it is contained within the skull made of tough bone. When the pressure in the brain becomes greater than the pressure of the heart, it will be unable to pump blood to the brain. The lack of blood flow deprives the brain of oxygen leading to its irreversible death. It is a legal form of death as much as death by cardiac arrest. A ventilator continues to blow air into lungs, while the heart receive oxygenated blood. The heart beats for some time. This does not mean that the person is alive, there is chance of recovery. Tissue may be recovered from donors who die of circulatory death, as well as of brain death – up to 24 hours past the cessation of heartbeat. The problems of transplant rejection is the key areas for medical management. The body has an immune response to the transplanted organ. It possibly leads to transplant failure and the immediate need to remove the organ from the recipient.
Types of donor.
Organ donors may be living or may have died of brain death or circulatory death.
Living donor.
The living donors donate a renewable tissue, cell, or fluid (e.g., blood, skin). The donated organ or part of it can regenerate or take on the workload of the rest of the organ. These are primarily single kidney donation, partial donation of liver, lung lobe, small bowel. Regenerative medicine in future may allow for laboratory-grown organs, using person's own cells via stem cells, or healthy cells extracted from the failing organs.
Deceased donor.
Cadaveric donors are people who have been declared brain-dead and whose organs are kept viable by ventilators until they can be excised for transplantation. Brain-stem dead donors are the majority of deceased donors. Circulatory-death-donors increase the potential pool of donors as demand for transplants continues to grow.
Living related donors.
Living related donors donate to family members or friends in whom they have an emotional feeling. The risk of surgery is negligible by the psychological benefit of not losing someone related to them. They do not suffer the ill effects of waiting on a list.
Paired exchange 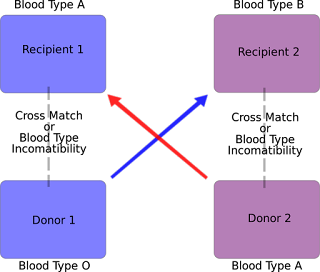 Diagram of an exchange between incompatible pairs
A "paired-exchange" is a technique of matching willing living donors to compatible recipients. A spouse may be willing to donate a kidney to their partner but cannot since there is not a biological match. The willing spouse's kidney is donated to a matching recipient who also has an incompatible but willing spouse. The second donor must match the first recipient to complete the pair exchange.
The transplants of skin grafts have potential to improve survival rate among burn patients. When the burns affect more than 30% of body surface area, the problem of infection, the chances of deformity and even death increases. One of the ways of preventing the complications is by early surgery to remove the burnt skin and cover the raw area with good skin.
Ethical concerns.
. The World Health Organization encourage transplantations to promote health. But transplantation tourism has the potential to violate human rights or exploit the poor. It violates basic human rights according to Articles 3 and 4 of the Universal Declaration of Human Rights .The increasing supply of organs may constraint for the right to life”. The criterion for legal death cannot be adequately defined. There are some common transplant laws which govern all transplants. The policies for each organ and the type of transplant for each organ is different. Health is a state subject. The law has a provision of Appropriate Authority to consider registration of a hospital who wants to undertake organ transplantation.
References:
1.Manara, A. R.; Murphy, P. G.; O'Callaghan, G. (2011). "Donation after circulatory death". British Journal of Anaesthesia. 108: i108–i121. PMID 22194426. doi:10.1093/bja/aer357.
2. WHO Guiding Principles on human cell, tissue and organ transplantation, Annexed to World Health Organization, 2008.
Submitted to the secretary, Odisha Bigyan Academy for publication in “Science Horizon” I declare that the article has not been reproduced.
Dr. Dwijesh Kumar Panda, M.D, Ph.D.  (Medicine), Senior Scientist
M5/12, Acharya Vihar, Bhubaneswar,
Contact: (0674)2543122.