Life on earth is a miracle, developed approximately three billion years ago. Life’s energy is derived from the sun. A very small portion of this energy is stored up as coal and petroleum. Almost all fuel is used today has a biological origin. Coal, oil, and natural gas are derived mostly from plant life. All the energy is obtained from the sun. All fossil fuels are indeed canned sunshine. Hydrogen and carbon combined to form sources of natural gas deep in the earth in the process of evolution. No single prescription exists for a solution to the energy problem. Energy conservation is not enough. Petroleum is not enough. Coal is not enough. Nuclear energy is not enough. Solar energy and geothermal energy are not enough. Only the proper combination of all these will suffice.

Our planet was formed five billion years ago. Early life existed in the oceans, and food for that life was manna from heaven. The topmost layers of the atmosphere exposed to ultraviolet radiation from the sun. This is a small portion of solar radiation. It arrives in a big chunk of quanta. All radiation consists of such quanta or energy bundles. From the high-frequency radiation came manna. These are the molecules easily capable of undergoing chemical changes. These quanta could serve as food for rudimentary forms of life.

Three billion years ago the atmosphere consisted of the elements carbon, hydrogen, oxygen, and nitrogen which are the chief constituents of living matter. They cannot release energy by reacting with each other. Once the light is absorbed by these molecules, chemical reactions can occur among them resulting in complicated molecules having energy content. This is the nutrient called manna, which falls from the sky into the ocean. 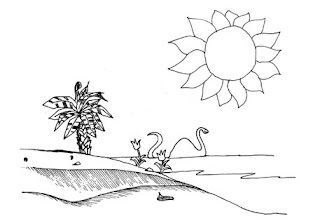 The nutrients that rained down from the skies for billion years have established a rich soup in which life could flourish and multiply. Chlorophyll is a complex chemical substance that utilizes sunlight for the production of manna. It is the final result of lengthy evolution. It absorbs visible light in the red and blue parts of the spectrum. It has a remarkable ability to store absorbed energy. The energy that accumulates is sufficient to compose basic plant components and nutrients such as cellulose and sugar. Thus, chlorophyll made it possible for abundant vegetable life to exist on earth. The body of the plant was made of carbon dioxide and water. It released oxygen in the course of photosynthesis. Oxygen made animal life possible, first in the sea and later on land. Animals are parasites to plants. We owe to plant life the oxygen we breathe. 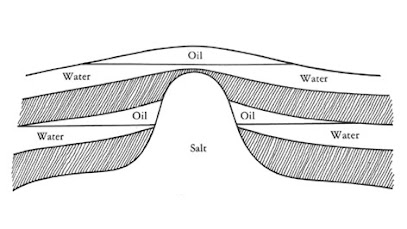 Traps are a salt dome. Salt is deposited from the evaporating seawater. Its horizontal layers are frequently covered by equally horizontal deposits of sand compacted by the stony substance. The salt is less dense than the stone layers above it. Therefore stone and salt exchange places. Big masses of salt pushing in the form of solid domes happen. The process takes millions of years. The rising salt beds break the geological layers. A typical structure of traps is illustrated in the figure. The shaded areas are different impermeable stony deposits. Oil and water are found in the permeable layers. Natural gas is present at the top of the oil layer. Salt domes and other traps can be located by geologists by their reflected sound waves. They are sought in the way a doctor checks our lungs. But while the doctor taps, the geologist uses a high explosive charge; and while the doctor listens with a stethoscope, the geologist uses a seismograph. Thus the salt domes and other traps are easily located. Most salt domes are drilled to determine the presence of oil.

The earth’s fossil stock will be effectively exhausted within the foreseeable future. In the case of oil, this may happen in a few decades. Coal will last for a few centuries. Nuclear fuels will be ample for many millennia. Solar energy is both ample and inexhaustible. In time, the use of these energy sources will become a practical reality. But fossil fuels made the Industrial Revolution which satisfied our needs. The future energy sources will be clean, ample, and lasting.

Posted by Dwijesh Ku Panda at 8:26 AM
Email ThisBlogThis!Share to TwitterShare to FacebookShare to Pinterest
Older Post Home